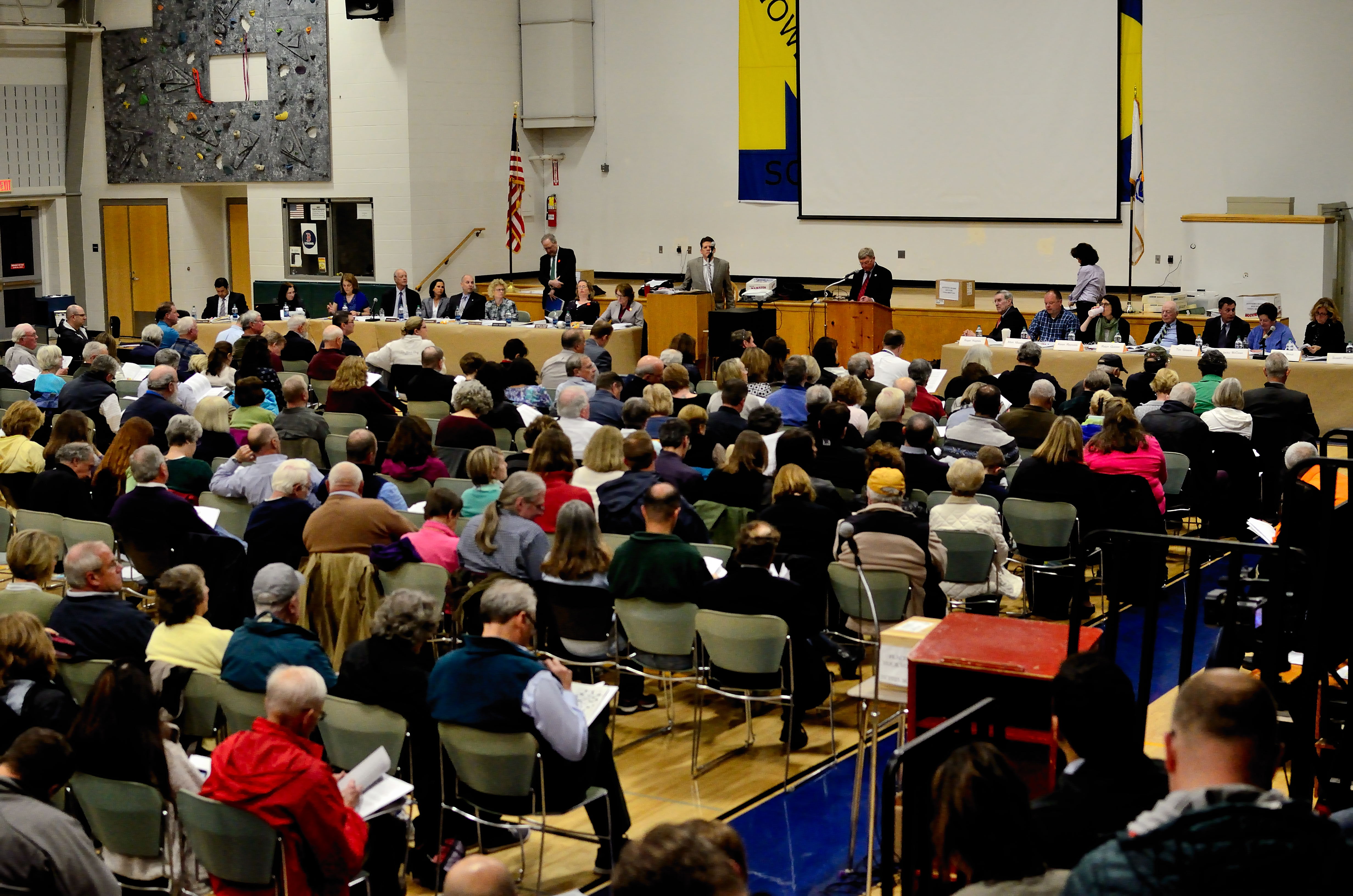 The Norwell Town Meeting of 2016 is in the books, but not without takeaways and controversy 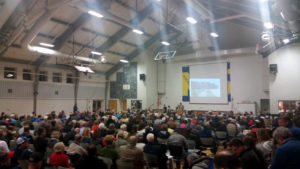 Norwell Town Meeting was expected to have a large turnout this season and expectations were correct. On the first night of Norwell Town Meeting residents came together in the oldest form of local democratic decision making to debate and vote on two highly contested articles. The most vocal article on the Norwell town warrant included a $1.4 Main Street sidewalk project and an article brought forth by the Selectman to change the previously vacant Highway Surveyor position from that of an elected position to one that is appointed by town officials. These two articles helped fill the Norwell Middle School gymnasium, at least on the first night.

The two big articles that brought out residents to Norwell Town Meeting this year failed to carry the two third votes required to pass, but because the voice vote sounded close on both articles, Town Moderator William Coffey called for a hand vote. Though the hand vote also appeared close to a split, it was not two thirds, which failed to pass the sidewalk article.  The Highway Surveyor article was also very close on the voice vote, however it was initially deemed that it failed to carry. After about 15 minutes or so, a resident took the floor and asked for reconsideration of the Highway Surveyor article, which the Town Moderator approved and then requested said hand count, which again failed to carry. With no change in the elected Norwell Highway Surveyor position in town, a week later, resident Glenn Ferguson was elected as the new Highway Surveyor at the polls.

Some other Norwell Town Meeting articles of note

A By-Law amendment regarding recalling elected officials passed, which would be brought forth by petition for either criminal offenses, notice of them, ethics violation or for not attending 50% of meetings. An Article to impose a 6% tax on Norwell’s motels and any lodging including Airbnb rentals in town was approved.  Article 18 to create a Billboard overlay district along a slice of Rte 3 failed to pass with objections from neighbors close to the area and others, however, there were pleas from many that the town is running out of ideas to generator new tax revenue.

Norwell voters approved the 2017 fiscal budget of $50,495,304 of which $25,444,860 is for Norwell schools. The Norwell School budget had a 3.48% increase, of which .61% is allocated for special ed. The Chair of the Norwell School Committee stated that the school district is in good shape and there are no foreseeable overrides, but stressed that the schools are only as healthy as the Town itself. Regarding Norwell’s roads, which everyone agrees are in dire need of improvement, the town will receive $450,000 in chapter 90 state funds plus town meeting approved $300,000 for road repairs. In addition, Town meeting approved $50,000 for an updated road survey, to grade the condition of each. Town meeting also approved an $848,000 article in capital ecpenditutes, of which $250,000 is to be transferred from the capital stabilization fund for a new ambulance. Town meeting approved a full time school resource officer through the police department budget. Also approved is a $210,000 article to repair Woodworth field #3 and #4 for girls softball. Town meeting approved an $8,000 article to pay for the TickSmart program to spread awareness and (hopefully) prevent tick-borne illness.

Takeaways from the 2016 Norwell Town Meeting

Several days after Town Meeting, a thread on Norwell Social, the Town’s Facebook page for Norwell residents discussed takeaways and ideas for future Town Meetings. Some residents suggested Saturday meetings so that more people, especially couples with young children could attend Town Meeting, although some suggested youth sports would actually limit attendance on a Saturday. Others suggested electronic voting through devices and mobile phones, which some suggested we could never achieve since we can’t even get the local TV and audio to work properly for those wishing to watch from home.