When you drive 20 miles south of Boston, you will quickly reach Norwell Massachusetts and the beautiful coastal towns of the South Shore. Norwell, Massachusetts is known for its rural charm dotted with country roads, an active dairy farm, corn fields and ball fields makes people feel like they are far away from the hustle and bustle of the city.

Once referred to as “the Inland People”, South Scituate was born 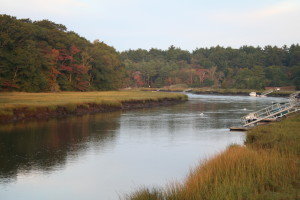 Norwell Massachusetts, then Satuit (later Scituate) was first settled in 1634, which encompassed present-day Scituate and Norwell a 2-mile stretch of Marshfield and part of Rockland.  The people who resided along the ocean and populated Scituate harbor referred to the residents up the river as “the Inland People.” This division grew between church parishioners and the debate over how to spend Federal surplus monies eventually lead to the secession of South Scituate. The town of South Scituate was officially created in 1849. Surnames of the earliest settlers in South Scituate, now Norwell, were that of Turner, Merritt, Oakman, Cushing, Sparrell, Vinal, Litchfield, Barstow and Jacobs.

The town later changed its name by ballot voting to Norwell Massachusetts in 1888, after Henry Norwell, a prominent Boston dry goods merchant agreed to provide matching funds for the maintenance of the town’s roads for a period of ten years. 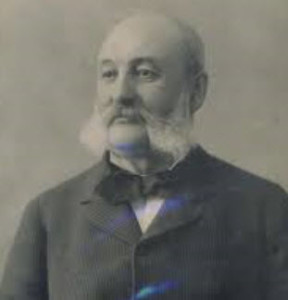 Henry Norwell was born in Scotland in 1832 and moved to America in 1855. In 1858 he married Hannah Merritt of South Scituate. After his father-in-laws passing the Merritt house became known as the Norwell House and was Henry’s and Hannah’s summer residence as he mostly lived and worked in Boston. Henry and Hannah’s beautiful antique Victorian home located at 166 Norwell Avenue still remains today, near the intersection of Old Oaken Bucket Road.

Shipbuilding was an Important Piece of Norwell’s History

Early settlers were attracted to Norwell Massachusetts for agricultural reasons, with the town later developing a major shipbuilding industry, based on the North River. Shipbuilding was a major industry in the 18th through the early 19th centuries. Some of the finest frigates, schooners, whalers, and merchant vessels were produced in Norwell and further down the river in North Marshfield and Pembroke. 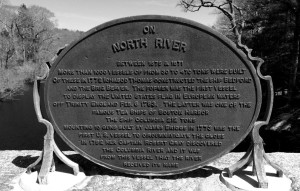 Between 1678 and 1871 more than 1,000 vessels from 30 to 470 tons were built on the North River. Resident Ichabod Thomas constructed two of the most famous ships, the “Bedford” and the “Brig Beaver.” The former was the first vessel to display the United States flag in European waters off Trinity, England in 1783.  The latter ship he built was one of the famous tea ships of Boston harbor. The 212 ton ship “Columbia” mounting 10 guns built by resident James Briggs in 1773 was the first United States vessel to circumnavigate the globe. In 1792, her Captain Robert Gray discovered the Columbia River in Oregon. Shipbuilder William Delano, who resided on River Street, also known as the “Lord North” because of his success in building ships on the famous North River, built the two largest ship here in the early 1800s – the 464 ton Mount Vernon and the 450 ton Lady Madison.

Norwell Massachusetts is a sought after Community because of its close proximity to Boston, quality schools, and its natural resources 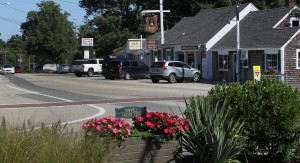 Norwell Massachusetts is a quiet and peaceful residential community with approximately 10,500 residents and over 3,300 residential homes. Its proximity to Boston, just 20 miles by car or commuter rail, makes it a convenient suburban community for people who work in the city and need easy access to Boston’s Logan International airport.  Norwell Massachusetts is only about thirty minutes drive from the Cape Cod Canal. It’s a wonderful place to raise a family, find seclusion and enjoy life and the outdoors.  The town is connected by rural country roads, side streets and cul-de-sac neighborhoods. Known for its quality public school system, Newsweek Magazine recently ranked Norwell High School #2 on the South Shore and #332 in America. Boston Magazine also ranked Norwell #2 on the South Shore and U.S. News & World Report ranked Norwell #3 on the South Shore and #575 in America.

Norwell Massachusetts is a destination point for nature lovers, and boaters 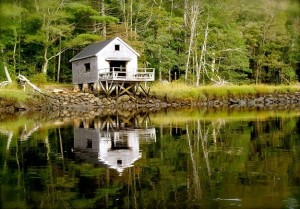 Much of Norwell’s eastern border lies along the beautiful North River leading to the Atlantic Ocean, where many shipbuilding companies once stood. There are many other brooks and ponds throughout the town, including Third Herring Brook, which constitutes much of the town’s border with Hanover, Accord Pond at the junction of Norwell, Rockland and Hingham, and Jacobs Pond, known for its annual fishing derby. The northern half of the town is hilly, and the southern end of Wompatuck State Park juts into the town. 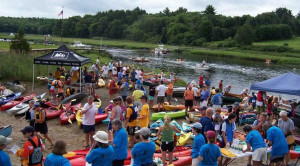 In the summer, you’ll see kids, and some parents too, cooling off with a jump into the North River from the Bridge Street bridge. Locals also enjoy competing in the annual North and South Rivers Watershed Association’s Great River Race. The North River is a great place to catch Bass during the tide change and you may even catch a Seal sunbathing on the marshy banks of the river. Many beautiful homes dot the North River with private docks, which affords boaters the lifestyle to take a quick ride up to Boston, Provincetown or many of the harbor islands that are part of the National Park system. You can also launch your boat from Bridge Street or at the King’s Landing Marina. A little secret for locals is that you can use one of their canoes or kayaks at the dock and just leave a few dollars in the can – as it’s an honor system.

Norwell has invested millions of dollars in paved pathways and boardwalks that now connect the high school and middle school that ultimately lead to the center of town and Gaffield Park. Residents have embraced this new wonderful asset where you will see neighbors walking, jogging and biking through these wooded conservation areas. 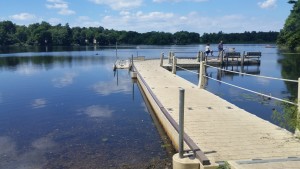 Norwell also offers several other conservation areas with walking and hiking options in the wilderness such as Jacobs Pond reservation area, Black Bog Pond, the Norris Reservation and Wampatuck State Park. All of these destinations are hugely popular to residents and visitors. Additionally, Norwell is home to the South Shore Natural Science Center located on Jacobs lane, a nonprofit organization dedicated to educating the public about the natural and cultural environments of the South Shore that offers live exhibits, 30 acres with trails and special events such as the alligator and crocodile show, the corn fest and green earth fest. Another local favorite is the annual fishing derby at Jacobs Pond where kids and adults can win the top spot for their catch. Jacobs Pond is also a great place to canoe and kayak.

If you’re looking for a great meal in Norwell, Tinker’s Son is the go-to for locals. Tink’s as some call it, offers delicious Irish staples such as Shepherd’s Pie, Ale battered Fish and Chips and Guinness braised beef short ribs.

Another local restaurant favorite is Trattoria San Pietro offering delicious homemade Italian dishes, the Beijing House for authentic Chinese and Asian dishes and Sushi, as well as the Fours Restaurant for good American staples and pub food and a great place to watch the big game. 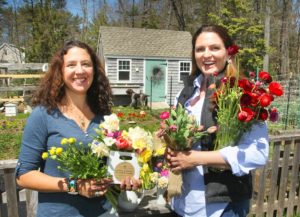 Norwell residents are fortunate to have many local businesses that offer unique products and services. Cross Street Flower Farm grows and sells fresh cut organic flowers and beautiful bouquets throughout the season to decorate your home and for special occasions. 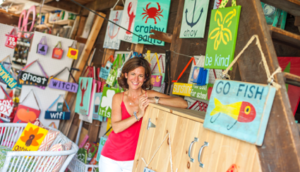 Another favorite in town is Citrus Daisy hand-made signs, which creates seasonal and personal messages that adorn the front doors of many Norwell homes. Norwell is also home to International Conglomerate Clean Harbors and Zildjian Cymbals. Zildjian was started in 1623 and has made cymbals for some of the most famous musicians in history.

Norwell is very fortunate to have an active dairy farm located on Prospect Street. Hornstra Dairy Farm is a popular meeting place for families and friends especially during the summer months where you can get a scoop of homemade ice cream at their dairy bar. 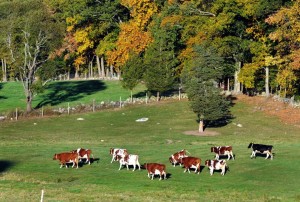 Families love to visit the newborn red and white Holsteins in the barn and watch them graze in the field. Hornstra offers field trips and tours to the local school children to teach them about the importance of local farming. With agriculture and farming being entrenched in Norwell’s history, especially at the historic Jacobs Farm homestead, the town is proud to have its own 14-acre community farm known as Norwell Farms. 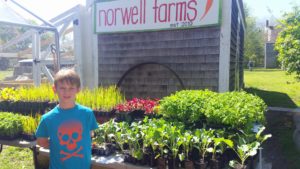 Residents can register to buy CSA shares or stop by the farm to buy farm to fork vegetables. You can also find Norwell Farm’s produce in some of the local restaurants.

New to Norwell is the Norwell Summerfest, which is a fun and entertaining one-day event held in the center of town. Last year the event attracted almost 10,000 people, which offered family fun, music, entertainment and local food. 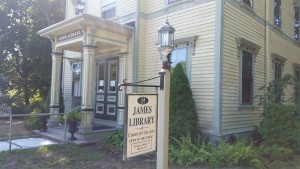 Some of the hidden jewels in Norwell are the James Library, North River Theatre and the Company Theatre, which offer a diverse offering of monthly musical performances and theatrical plays.

Being a resident and Realtor in Norwell MA makes me interested in learning as much as I can about its past so we can all teach others and keep the importance and memories alive for future generations. If you have the time, I would recommend reading the book “A Narrative of Scituate and Norwell” written by Samuel H. Olson, a longtime Norwell resident and Norwell historical society member. Much of my historical teachings of the town of Norwell MA came from reading Mr. Olson’s book.

If I can ever be of any assistance to you or your family in any way, please feel free to contact me, whether it’s real estate related or otherwise. Please contact George Jamieson, Realtor, at 617-877-4839 or email at George.jamieson@cbrealty.com.

If you are thinking about buying a home in Norwell, please click here to view all the available homes for sale.