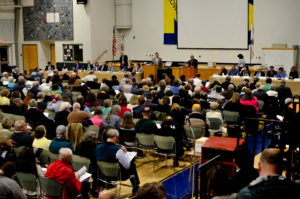 Norwell MA voters who attended Annual Town Meeting on May 4th and 5th seemed to have their minds made up on what was thought to be somewhat controversial warrant articles that had been debated in the coffee shops and on the soccer fields prior to voting. Several hundred voters turned out for annual town meeting.

At this year’s annual town meeting the elected officials of the Norwell board of health, requested a switch to “PAYT”, a pay as you throw trash program, which will commence in July 2016. This is in hopes to increase Norwell’s recycling, which currently stands at a lowly 24%. Pay as you throw isn’t necessarily a true description of the program in its entirety as residents will have “free” trash and recyclable hauling up to a maximum limit of a 35 gallon town provided trash cart and a 64 gallon recycle cart, although board of health officials state that recycles will be unlimited. Any trash over and above the 35 gallon trash cart, residents will have to purchase trash bags at a cost of $2 per bag at local grocery stores.

Additionally, Norwell MA voters at annual town meeting approved selling the old police station in Norwell center to the Community Housing Trust (CHT), established by the town of Norwell in its efforts to tackle affordable housing needs in Norwell more aggressively and strategically. Several Veterans who live in town spoke on the issue, one specifically, and stated “the Veterans in this town don’t need an American Legion hall, they desperately need housing.” There was also an article on the warrant to sell the old police station to the American Legion so they could establish a permanent post for their members, however, voters easily approved an article selling the property to the CHT, whereby 14 units of 55+ affordable housing would be constructed, with preference being given to Norwell residents and Veterans who apply.

Norwell MA voters also approved an article, as part of a Main Street repaving project from the Hanover town line to Norwell center, which was approved at last year’s town meeting, to now construct sidewalks or pathwalks as they are being coined, which will paid with Community Preservation Act funds, a separate tax paid by residents each quarter, whereby the Commonwealth kicks in a certain percentage of funds to the account, but does not match the local tax, which evidently at one time it did. Many years ago, voters did not approve sidewalks on Main Street, either due to the lack of funding or some residents on Main Street simply not wanting sidewalks in front of their house. Either way, sidewalks will be a welcomed addition to many residents, especially those who reside in nearby neighborhoods abutting Main street as well as children walking or biking from the high school or middle school to Norwell Center.